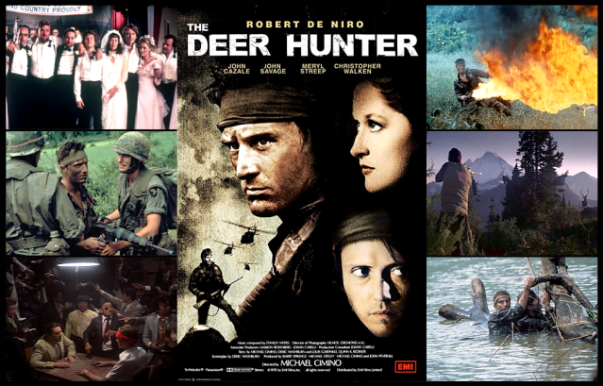 “The Deer Hunter is a 1978 American epicwardrama film co-written and directed by Michael Cimino about a trio of Russian-American steelworkers whose lives were changed forever after fighting in the Vietnam War. The three soldiers are played by Robert De Niro, Christopher Walken, and John Savage, with John Cazale (in his final role), Meryl Streep, and George Dzundza playing supporting roles. The story takes place in Clairton, Pennsylvania, a working-class town on the Monongahela River south of Pittsburgh, and in Vietnam. …”
W – The Deer Hunter, YouTube: The Deer Hunter Official Trailer #1

“Full Metal Jacket is a 1987 wardrama film that was directed and produced by Stanley Kubrick, who also co-wrote the screenplay with Michael Herr and Gustav Hasford. … The storyline follows a platoon of U.S. Marines through their boot camp